Other pages in the history section

Sir Francis Drake was a brilliant navigator, an excellent soldier, an accomplished politician and best remembered as an extraordinary explorer.

In his most famous ship, the Golden Hind, be became the first Englishman to circumnavigate the globe in an epic expedition of plunder and discovery over four hundred years ago. 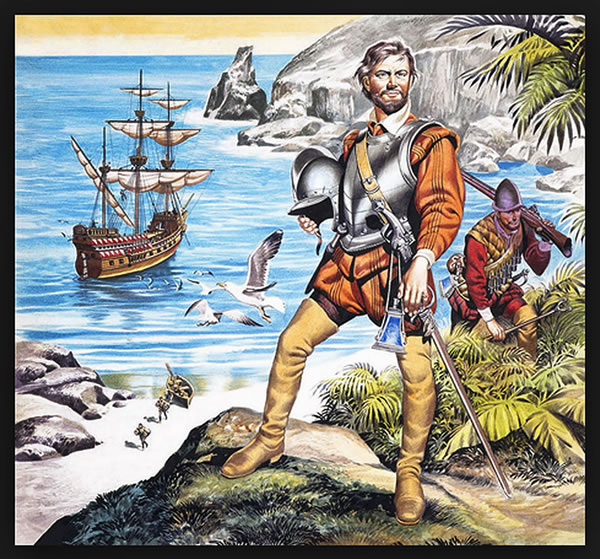 Drake was born in Tavistock, near Plymouth in 1540. His father was a Protestant farmer and he was one of twelve sons.

When Drake was nine, the family relocated from Devon to Medway in Kent for two reasons, firstly for his father to avoid prosecution for the stealing of a horse (a serious offence in the Tudor period) and secondly to avoid the influx of the Catholic faith into the West Country and the inevitable conflicts with the family's strong Protestantism. Drake became an apprentice on a small cargo vessel plying its way between the North Sea ports, and was eventually bequeathed the boat when its owner died. After a couple of years, Drake moved back to Plymouth where at the age of 23 he sailed on his first voyage to the Caribbean with his cousin Sir John Hawkins.

On their first voyage to the Caribbean, they were both tricked by the Spanish when both nationalities were anchored at close quarters in the harbour of San Juan de Ulua. They narrowly escaped capture and death when the Spanish went back on their word to allow them protected harbour and attacked them. Many of their English crew and two of Drake's brothers were slaughtered and he thereafter harboured a deep and lifelong dislike of the Spanish.

Between 1577-1580 Drake sailed around the world on his epic voyage, bringing back a ship full of gold, silver, jewels and other treasures. See The Circumnavigation. Known as 'El Draco' or 'The Dragon' by the Spanish, he was feared and reviled by them.

After the circumnavigation, with his newfound wealth, Drake bought dozens or properties in and around Plymouth including Buckland Abbey, a stately home, from Sir Richard Grenville, another Elizabethan admiral, and one of Drake’s arch rivals. Shortly after, Drake was elected as mayor of Plymouth, and then an MP, representing his Devon constituency in London. Drake married twice, firstly to Mary for twelve years prior to the circumnavigation, and secondly, on his return to the well-to-do Lady Elizabeth Sydenham.

One of his Drake’s most significant civic acts was to oversee the construction of a granite lined leat, or watercourse, which brought fresh water from Dartmoor down to Plymouth. In Drake’s lifetime, however, the water was used mostly to power mills (owned by Drake), and by the time of his death only a few households were able to make use of the water. However, the leat continued to supply fresh water the 30 miles to Plymouth successfully, to the general public for over 300 years after it’s construction, and parts of it can still be seen today on Dartmoor.

Seven years after the circumnavigation in 1587, Drake was also hailed a hero when he was appointed Vice Admiral of the fleet to defend England from the Spanish Armada. Prior to the Armada beginning Drake led a bold 'fire storm' raid against the Spanish ships anchored at port in Cadiz, destroying many prior to the eventual unsuccessful raid by the Spanish a year later.

In 1595 Drake came out of 'retirement' to attempt to take Panama from the Spanish, an area of the world that by now he knew well. He was taken ill in the Caribbean and died of yellow fever and dysentry. He was buried at sea, in a lead coffin, in his suit of armour, just off the Panama coast. His body has never been recovered. He was 56 years old.

Queen Elizabeth granted Drake a family crest with the Latin motto ‘Sic Parvis Magna’ which translates as ‘Great things from Small Beginnings’, a reference to his humble start in life. Drake personally designed the imagery, which features God's hand pulling his ship around the globe.

About the cannons used by the English and Spanish navies.